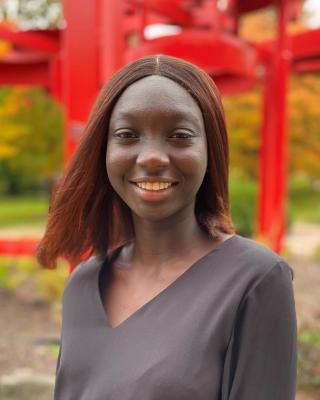 Oluwatumininu (Tumi) Adeeko is a third-year student and a Mechanical Engineering major, originally from Nigeria. Tumi was selected as a Wen H. Ko summer intern to work with the Advanced Platform Technology (APT) Center at the Cleveland VA Medical Research and Education Foundation from June 2021. Although she was hired by the VA, she conducted most of her research on Case Western Reserve University’s campus.

Her first project, entitled the “Mechanical characterization of nitinol wires used in orthodontia,” involved tensile and fatigue testing, failure analysis, and mechanical characterization of different grades of shape memory alloys used in making dental archwires. Her work provided additional data for an ongoing study into the same topic and will be crucial in helping clinicians determine the appropriate materials to use for different stages of orthodontal treatment. A notable achievement is her participation in “Intersections,” a symposium hosted by Case Western that enables undergraduates to present their research and creative projects. Her second project contributed to developing a novel medical device, and most of her work involved optimization of tests prints using a Nanojet Aerosol printer- the first of its kind at Case Western. Her work on this project built a foundation upon which other scholars would continue to build upon in developing this device.

Tumi remains on the Dean’s list for all her semesters at YSU and has made several appearances on the President’s list. She was the leader of the team that represented Youngstown State University at the Hult Prize- a competition which can be likened to the Nobel Prize for college students- and she led her team to the finals. She also participated twice in a math modeling competition, COMAP, in 2020 and 2021.

Additionally, Tumi is an honors student and the leader of a student group called MALAINA within the Sokolov Honors College, which aims to unify and empower students of diverse backgrounds. She is the President of the African and Caribbean Student Union here at YSU and the Secretary of the National Society of Black Engineers (YSU Chapter). She is also an active member of the American Society of Black Engineers (ASME) as well as other honors societies at Youngstown State University.

Tumi plans on continuing her research in shape memory alloys while earning her Master’s and potentially a Ph.D. in Materials Science and Engineering. Following her graduate studies, Tumi has plans to return to her home country, where she will continue her work with materials science and engineering while supporting efforts to empower the youth and encourage young Nigerian women to get interested in STEM.