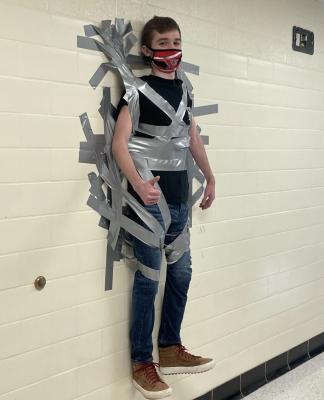 Pictured: Duct-tape a friend was one of several challenges hosted during this year's engineers week competition

After several years’ absence, Engineers Week returned in full force the last week of February 2022. Engineers Week is a national celebration of engineers and the field of engineering. Here’s a summary of this year’s highlights.

Students across all engineering majors were invited to participate in competitions, social events, and a food drive which ultimately donated 2,108 food items to the Mahoning Valley Rescue Mission. Students earned points by competing, attending events, and donating food items. Each day, a competition was hosted by one of the engineering areas, including a drone race and duct tape a friend challenge! Another highlight was an industry forum on internships and co-ops where students had the opportunity to network with nine engineers from various companies in the Youngstown area. At the end of the week the Mechanical/Mechanical Tech Engineering division narrowly defeated the Civil/Civil Tech Engineering division by 1.93 points. We would like to thank all of our sponsors for help making Engineers Week possible with a special thank you to First Energy, Novelis, MS Consultants, and Altronic.

Order Of The Engineer Ceremony

For over 50 years, the Order of the Engineer has upheld the standards and dignity of the engineering profession. Students are invited to be inducted into the order, which involves a ceremony reciting the Obligation of an Engineer. Inductees receive a ring, symbolizing their professional pledge. Colonel Theresa Schlosser, Commander of the US Army Engineer Research and Development Center, served as the keynote speaker. This year, 49 students were inducted into the Order:

On February 22, the College of STEM and Department of Military Science teamed up to host 70 students from 6 area high schools for our First Annual Engineers Week High School Celebration. Colonel Theresa Schlosser, Commander of the US Army Engineer Research and Development Center, kicked off the event talking about the urgency of needing more students to enter STEM fields and the incredible opportunities awaiting them upon graduation. She also highlighted opportunities available to students through the military, either as an enlisted member or as a civilian.

Dr. Rick Deschenes, Assistant Professor of Civil and Environmental Engineering, along with students from the YSU Chapter of the American Society of Civil Engineers then led the students in an engineering challenge. Groups of up to 5 students were tasked with building a bridge out of nothing but straws and tape. After about an hour to design and build their bridges, the structures were evaluated for strength, efficiency, and creativity. The students had fun designing (and destroying!) their creations and learned a bit about the basics of engineering design in the process.